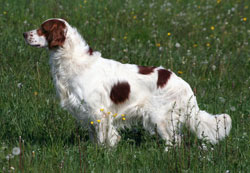 
The Irish Red and White Setter is a breed of dog, more specifically a setter. It is virtually identical in use and temperament to its cousin, the Irish Setter, but is more often found as a working gundog.

The Irish Red and White Setter is a pointing bird dog which originated in the eighteenth century in Ireland where they were particularly associated with the Rossmore family. They can take longer to train than other gundogs, but once trained they are a loyal and reliable companion. They need firm, decisive but not harsh training. They can be the most devoted and affectionate of dogs, and are extremely intelligent. Irish Red and White Setters thrive best in active families, where they have outlets for their high energy, and require space to run freely.

Originally all Irish Setters were mostly red, or red and white, but from around 1880 breeders began to prefer the solid red variety. Consequently, the breed came close to extinction. Thanks to the efforts of an early 20th century Northern Irish clergyman, Noble Huston, the breed survived but only in small numbers in the island of Ireland. From around 1970 there was a planned revival of the breed, and the numbers began to increase slowly. By the 1980s IRWS were being imported into Great Britain, where the breed was developed more as a show dog. In contrast to these British IRWS, the breed has continued to be primarily a working and field trial dog in Ireland.

Breed Status in the United States: From 1 January 2009, the Irish Red and White Setter is fully recognised by the AKC and is eligible to compete in conformation and all other competitive fields. The breed is recognised by most other national Kennel Clubs. All registered Irish Red and White Setters are the descendants of the dogs accepted by the Irish Kennel Club at the time of the revival of the breed in the 1970s.