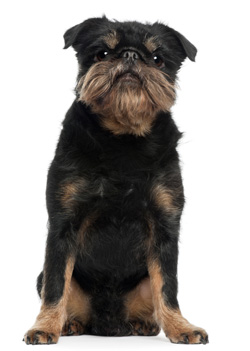 
The Griffon Bruxellois or Brussels Griffon is a breed of dog, named for the city of their origin, Brussels, Belgium. Part of the toy dog category, the breed is generally small, with a flat face, prominent chin, and large wide-set eyes that gives the Griffon an almost human expression—and they are often compared to an Ewok.

A sturdy toy dog with a thick set, well balanced body, that should give a squared appearance in proportion when viewed from the side. A proper Griffon should be muscular, compact and well-boned, and should not seem delicate, racy or overly cobby. The Griffon will often feel heavier than it is for such a small size. Because they are judged by weight rather than shoulder height, proper proportioning is essential to determine if a dog is too fat, too slim or too tall for their size.

Weight standards, especially upper range disqualification, vary from standards, but the ideal weight is 3.6–4.5 kg (8–10 lb) for both sexes.

The Griffon Bruxellois is known to be a bit sensitive, to have a huge heart, and to have a strong desire to snuggle and be with his or her master. They have an air of self-importance that can be especially charming. A Griffon should not be overly shy or aggressive, however, they are very emotionally sensitive. Because of this, they should be socialised carefully at a young age. They will be alert and interested in their surroundings.

Griffons tend to bond with one human more than others, and because of this, along with their small size, may not be suitable as a family pet, especially one with very small children. They tend to get along well with other animals in the house, such as cats, dogs and ferrets, but can get into trouble because they have no concept of size, and will attempt to boss around dogs much larger than themselves.

Having a Griffon means having a true constant companion. They need their favorite person all the time, and will be very unhappy if left outdoors or alone most of the day. A Griffon Bruxellois will want to follow you about the house, on your errands, and to bed.

For centuries, rough coated, short nosed toy dog breeds have been found in Belgium, but the true history of the Griffon Bruxellois started in the 1800s, not in royal palaces, but in coach houses.

To help keep rats away, Belgium coachmen used to keep small terriers called Griffons d’Ecurie in their stables. These Affenpinscher-like dogs were friendly and popular. At some point in the 1800s, these coachmen bred their Griffons with imported toy dogs, such as the Pug, and the King Charles Spaniel, bringing about the change in coat types that lead to the Petits Brabançon, which was originally a fault of the breed. The spaniels also brought the rich red and black and tan colour of the modern Griffon Bruxellois and Griffon Belge.

The First World War and World War II proved to be a disastrous time for the breed. War time is difficult on any dog breed, and the recovering numbers after the First World War were set back by increased vigilance in breeding faults such as webbed toes. By the end of the Second World War, Belgium had almost no native Griffon Bruxellois left, and only through the vigilance of dedicated breeders, in England particularly, that the breed survived at all.

The breed has never been numerous or popular, but had a brief vogue in the late 1950's, and now is generally an uncommon breed.