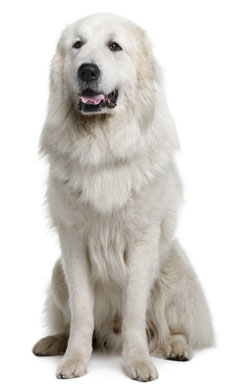 
The Pyrenean Mountain Dog, known as the Great Pyrenees in North America, is a large breed of dog used as a livestock guardian dog.

The Great Pyrenees is a very old breed, and has been used for hundreds of years by shepherds, including those of the Basque people, who inhabit parts of the region in and around the Pyrenees Mountains of southern France and northern Spain.

One of the first descriptions of the breed dates from 1407, and from 1675 the breed was a favourite of The Grand Dauphin and other members of the French aristocracy. By the early nineteenth century there was a thriving market for the dogs in mountain towns, from where they would be taken to other parts of France. However as late as 1874 the breed was not completely standardised in appearance, with two major sub-types recorded, the Western and the Eastern.

They are related to several other large white European livestock guardian dogs (LGD), including the Italian Maremma Sheepdog, Kuvasz (Hungary), Akbash Dog (Turkey) and Polish Tatra or Polski Owczarek Podhalanski, and somewhat less closely to the Newfoundland and St. Bernard.