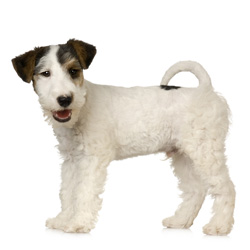 The breeds were established to assist in fox hunting. Before their development, a hunt would be ruined as soon as the fox reached its hole. The introduction of Fox Terriers into the hunting party solved the problem. If the fox ‘went to ground’ (reached and entered its lair), the terrier would be sent in after it. This identified the major requirements for a Fox Terrier. Firstly, it had to have the stamina to run with the Foxhounds. Secondly, it had to be small enough to follow a fox down its lair. And thirdly, it had to be tough, as a cornered fox was likely to turn and try to fight off an intruder, so a foxy had to be able to stand up to it.

The term Fox Terrier was generic until the latter part of the 19th Century. It referred to a group of dogs of varying type which were bred for the hunt. These dogs were often called ‘foxies’ regardless of type or size. The first Fox Terrier, a dog called ‘Foiler’ or ‘Old Foiler’, was registered by the Kennel Club circa 1875-6, and the breed began the process of standardisation.

Refinement of breed types led to the assignment of new breed names to the ensuing breeds. A differentiation was made between the Fox Terrier varieties, although the two breeds were shown under the same breed standard until well into the 20th century. The process of selective breeding was duplicated in other countries as emigrants took their dogs to other parts of the world.

In the United States, fanciers of the Jack Russell Terrier were adamant that their dog, of a type created by The Reverend Mr. John Russell, The Sporting Parson, was as much of a fox terrier as the smooth or wirehaired varieties. They referred to those breeds as the Modern Fox Terriers. Some Jack Russell owners preferred that their breed clubs remain unaffiliated, to preserve the working qualities of their fox terrier.

The Toy Fox Terrier was developed by selected breeding from smaller Fox Terriers. The breed was recognized by the United Kennel Club in 1936 and generated little controversy. In Australia, a distinct type of Australian Fox Terrier was becoming recognizable during the same period in which the fox terrier breed was being standardized. The miniature version of this new dog became extremely popular. Smooth and Wirehair Fox Terriers are often referred to as Standard Fox Terriers in Australia in an attempt to minimize confusion.

Today, there are many and varied breeds that are descended from or related to earlier fox terrier types. These include the Japanese Terrier, the Rat Terrier and the Tenterfield Terrier. The Smooth and Wirehair Fox Terriers are seldom used for hunting these days and are more often pets. Their small size makes them appealing.