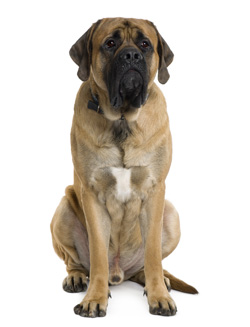 
The English Mastiff, referred to by virtually all Kennel Clubs simply as the Mastiff, is a breed of large dog perhaps descended from the ancient Alaunt through the Pugnaces Britanniae. Distinguishable by enormous size, massive head, and a limited range of colors, but always displaying a black mask, the Mastiff is noted for its gentle temperament. The lineage of modern dogs can be traced back to the early 19th century, and the modern type was stabilised in the 1880s. Following a period of sharp decline, the Mastiff has increased its worldwide popularity.

The greatest weight ever recorded for a dog was an English Mastiff, 343 pounds (156 kg), was from England named Aicama Zorba of La Susa, although claims of larger dogs exist.[3] According to the 1989 edition of the Guinness Book of Records, in March 1989, when he was 7 years old, Zorba stood 35 inches (89 cm) at the shoulder and was 8.25 feet (251 cm) from the tip of his nose to the tip of his tail, about the size of a small donkey. After 2000, the Guinness Book of World Records stopped accepting largest or heaviest pet records.