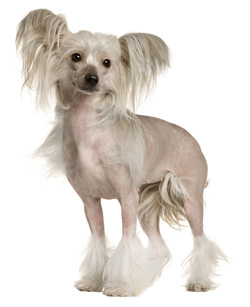 
The Chinese Crested dog is a smallish breed of dog known for its unusual appearance.

Though associated with China since the 13th century, many believe it was originally brought there from Africa and others believe that it might be a cross of the Chihuahua and Mexican Hairless, the latter of which it resembles.

It comes in two varieties: Hairless and Powder puff. Hairless are the more famous variety of Chinese crested, known for their lack of a fur coat. Instead, they have a soft, humanlike skin that is unusual to the touch, though they do have tufts of fur on their paws ("socks") and tail ("plume") and long, wavy hair on their heads ("crest"). Fur on the muzzle, known as a beard, is not uncommon. Their skin comes in a variety of colours, ranging from a pale flesh to black, and is often mottled. Hairless crested often lack a full set of teeth.

Chinese Cresteds are affectionate, energetic, and playful, though some develop neurotic behaviour. The Hairless is susceptible to acne and sunburn. Maintenance of the skin is similar to maintaining human skin—moisturising cream can keep the skin from becoming too dry, and in fair-skinned cresteds, if one lives in a warm climate where there is a lot of sun (Australia, Spain, and so on) one should apply sunscreen to the dog's skin.

Overall, if one is prepared to give proper maintenance, attention, and care, a Chinese Crested can, barring accident or illness, live up to fifteen years.