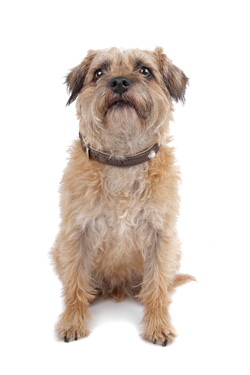 
A Border Terrier is a small, rough-coated breed of dog of the terrier group. Originally bred as fox and vermin hunters, Border Terriers share ancestry with Dandie Dinmont Terriers and Bedlington Terriers.

Though the breed is much older, the Border Terrier was officially recognised by The Kennel Club in Great Britain in 1920. Though sometimes stubborn and strong willed; border terriers are, on the whole very even tempered, and are friendly and rarely aggressive.The mood changes depending on the dog. Border Terriers generally get along well with other dogs and are often good with children, but may chase cats and any other small pets.

Borders do well in task-oriented activities and have a surprising ability to jump high and run fast given the size of their legs. The breed has excelled in agility training, but they are quicker to learn jumps and see-saws than weaving poles. They take training for tasks very well, but appear less tractable if being taught mere tricks.

They are intelligent and eager to please, but they retain the capacity for independent thinking and initiative that were bred into them for working rats and fox underground. Their love of people and even temperament make them fine therapy dogs, especially for children and the elderly, and they are occasionally used to aid the blind or deaf. From a young age they should be trained on command.

Borders can adapt to different environments and situations well, and are able to deal with temporary change well. They will get along well with cats that they have been raised with, but may chase other cats and small animals such as mice, rabbits, squirrels, rats, and guinea pigs.

Borders love to sit and watch what is going on. Walks with Borders will often involve them sitting and lying in the grass to observe the environment around them.