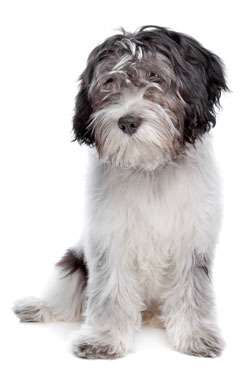 
The Schapendoes or Dutch Sheepdog, is a breed of dog originating in the Netherlands. The Schapendoes was originally a herding dog and general farm dog, but today also participates in dog sports such as agility and flyball.

The Schapendoes descends from a general type of farm and herding dog popular in the Drenthe province of the Netherlands, and the Veluwe, an area of forests and swampland. The dogs there had many names, and were not a specific breed as we use the term today. They were the local working dog, adapted to the people, environment, and types of work needed. They were exhibited in early dog shows (in the 1870s) as Domestic herding dog.

The dogs became extinct during World War II, and the modern day breed descends from the few survivors.

The breed standard describes the Schapendoes as friendly, high spirited, and affectionate. He is not a guard dog or aggressively protective, and if properly socialised while young, would most likely make a good family dog, as well as a good dog for active sports. Lively and intelligent dogs must receive regular training and outings. Temperament of individual dogs may vary.