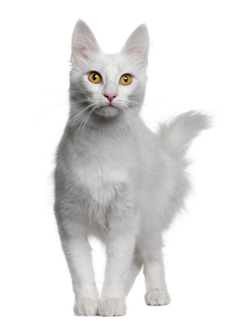 
The Turkish Angora (Turkish: Ankara Kedisi) is a breed of domestic cat. Turkish Angoras are one of the ancient, naturally-occurring cat breeds, having originated in central Turkey, in the Ankara (historically known as Angora) region.

Turkish Angora Cats have a silky (originally white), medium-long length coat, no undercoat and fine bone structure. There seems to be a connection between Ankara Cats and Persians (see below), and the Turkish Angora is also a distant cousin of the Turkish Van. Although they are known for their shimmery white coat, currently there are more than twenty varieties including black, blue, and reddish fur. They come in tabby and tabby-white, along with smoke varieties, and are in every color other than pointed, lavender, and cinnamon (all of which would indicate breeding to an outcross).

Eyes may be blue, green, or amber, or even one blue and one amber or green. The W gene responsible for the white coat and blue eye is closely related to the hearing ability, and presence of a blue eye can indicate the cat is deaf to the side the blue eye is located. However, a great many blue and odd-eyed white cats have normal hearing, and even deaf cats lead a very normal life if kept indoors.

Ears are pointed and large, eyes are almond shaped and the head is massive with a two plane profile. Another characteristic is the plumed tail, which is often carried upright, perpendicular to the back.

Duchess (voiced by Eva Gabor), the mother of three kittens and main protagonist of The Aristocats, is a Turkish Angora.