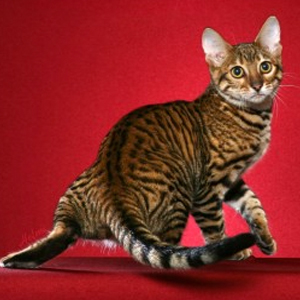 
The toyger is a breed of cat, the result of breeding domestic shorthaired tabbies (beginning in the 1980s) to make them resemble a "toy tiger", as its striped coat is reminiscent of the tiger's. The breed's creator, Judy Sudgen, has stated that the breed was developed in order to inspire people to care about the conservation of tigers in the wild. It was recognized for "Registration only" by The International Cat Association in the early 1990s, and in 2007 its status was upgraded to allow the breed full Championship status.

The breed began development in 1980 when Judy Sudgen, a breeder looking to clarify the mackerel markings in tabbies, noticed distinctive markings in two of her cats. These markings, occurring on the head, an area normally devoid of distinct pattern, first inspired the idea of a tiger-like tabby. After importing a tom from the streets of India with noticeable head markings, the quest to develop tiger-like, circular face markings in the cats began. The introduction of the Bengal breed into the gene pool was a move on Sudgen's part to produce a "big cat body".

With the aid of computer imaging, breeders have been able to develop a prospective model for the desired, final look of the breed. By 2010, breeders hope to have achieved rounded ears, and a wider nosebridge. Smaller eyes, whitened chest and stomach markings, and a cheek ruff are also breed possibilities for the future.