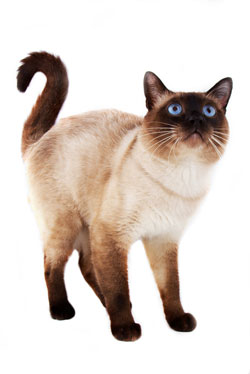 
Thai is newly classified cat breed, similar to but distinct from the modern Western Siamese cat.

There is little dispute that the cats that were imported from Siam to Western countries in the 19th and early 20th century were broader in features than today’s Western Siamese. While the Thai, known in Thailand as the Wichien-Maat, has common ancestry with the Western Siamese, generations of separate breeding of these two cats have spearheaded the development of two distinct breeds.The International Cat Association (TICA), approved the look of the Old-Style Siamese to be shown as Thai in the Preliminary New Breed category, February 17, 2007. This approval was for a cat that represents the early 20th-century Siamese and can still be found in Thailand catteries (in Thailand this cat has been called Wichien-Maat) and was shown beginning in 1993 in Europe. Around the world, registered Siamese and imported Wichien-Maats have played a pivotal role in the development of the Thai cat. Breeders internationally banded together to save the old-style look and promote the authentic cat, whose roots can be traced directly to Thailand (formerly called Siam). As of May 1, 2010, the Thai has Championship status in TICA, enabling it to compete along with the other breeds of pedigreed cats.

The Thai/Old Style Siamese and the modern Western Siamese share a commonality of distant relatives, the pointed gene and the outgoing, people-loving, vocal personality made famous in the West by the early Siamese imports. But on careful examination, the evidence makes it apparent that the recent Thai bloodlines are not commonly seen in the Western Siamese lines of today and Thai cats maintain a look distinct from that of the Western show Siamese. Thai bloodlines are a conglomeration of Siamese and/or imported Wichien-Maat.

The primary features of the Thai are that it is a pointed cat of foreign body type (more elongated than the average Western domestic cat, but less so than the modern Western Siamese or Oriental, which are classified as oriental type); has a modified wedge shaped head, a profile with a long flat forehead and no sharp nose break or stop; has a short, flat-lying single coat and does not carry the longhair gene; has a registered pedigree dating back to the early Siamese with no Western domestic short hair ancestors or import documentation from Thailand. The premise of the Thai cat is to help preserve the old look, yet provide a future that focuses on healthy diversified lines and the authenticity and personality of the Old-Style Siamese.