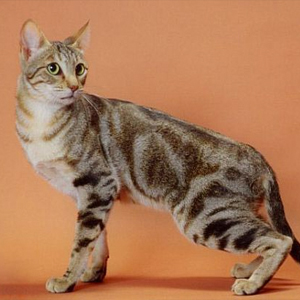 
The Sokoke is a breed of cat. The original name of the breed was Khadzonzos. This name was given to the cat by the local people, the Giriama tribe, who had known of the cat for a considerable time. It is speculated that this breed of cat had been around for possibly centuries before the intervention of the West. "Khadzonzo" means "look like tree bark" in the language of the Giriama people and it is plain to see why. The coat of this cat is a modified tabby (a marbled appearance much like the marbled Bengal), which looks like tree bark.

The Khadzonzos cats were discovered in the Arabuko-Sokoke forest, on the Kenyan coast, by Jeni Slater in 1978. Gloria Moeldrop, a friend of Slater's, brought some of the cats home with her to Denmark to breed because Jeni Slater feared for the survival of the cat in Kenya. In 1990, she imported more cats from Kenya to strengthen the breeding stock. The cats were first shown in Copenhagen in 1984. The breed was officially recognised by the FIFe in 1993, with the name changed to Sokoke, after where they came from.The Sokoke is also currently registered by The International Cat Association(TICA) the World's largest domestic Cat Registry, and is eligible to be shown in the Preliminary New Breed class at TICA-sanctioned shows.

There has been some speculation as to whether this is a domestic cat or a descendant of a wild cat that has domesticated itself. With recently published data from the Cat Genome Project,based on DNA swabs, it has been concluded that the Sokoke is part of the Asian Group of domestic cats, and has Arabian Wildcat genetic origins as well.

The Sokoke, the free-roaming streetcats of the Kenya coastal area, and the Cats of Lamu Island have now been put into a small genetic branch of the Asian domestic Group with the Arabian Wildcat influence. These three types of cat share regional and genetic similarities but are very different in coloration and structure when looked at closely.