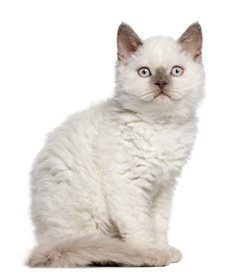 
The Selkirk Rex is a breed of cat with highly curled hair, including the whiskers (vibrissae). It is distinct from all other Rex breeds. Unlike the Devon Rex and Cornish Rex, the hair is of normal length and not partly missing, and there are longhair and shorthair varieties.

It differs from the LaPerm in that its coat is more plush and thick and although both have dominant Rex genes they behave in different ways. While the LaPerm gene is a simple dominant, the Selkirk gene acts as an incomplete dominant; incompletely dominant allele pairs produce three possible genotypes and phenotypes: heterozygous cats may have a fuller coat that is preferred in the show ring, while homozygous cats may have a tighter curl and less coat volume.

The temperament of the Selkirk Rex reflects that of the breeds used in its development. They have a lot of the laid-back, reserved qualities of the British Shorthair, the cuddly nature of the Persian, and the playfulness of the Exotic Shorthair. They are very patient, tolerant, and loving.