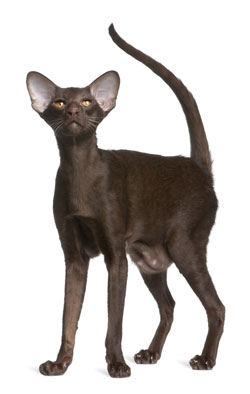 
The Oriental Shorthair is a breed of cat. This cat combines the Siamese body with a diversity of colorings and patterns.

Oriental Shorthairs are intelligent, social animals who bond very closely to their people. They are inquisitive, friendly, emotional, demanding and often quite vocal. They will depend on and trust you forever if you love and take care of them. Their purr can be extremely loud when happy.

The Oriental Shorthair is a member of the Siamese family. They can be found in solid colours (white, red, chocolate, cream, ebony, blue, lavender, cinnamon, or fawn), smoke (white undercoat to any of the above except white), shaded (only the hair tips coloured), parti-colour (red or cream splashes on any of the above), tabby (mackerel/striped, ticked, spotted, and blotched/classic), and bi-coloured (any of the above, with white). In total, over 300 colour and pattern combinations are possible.

The Siamese cat was imported to Britain from Siam (Thailand) in the later half of the 1800s. According to reports, both pointed and solid colours were imported. The gene that causes the colour to be restricted to the points is a recessive gene, therefore the general population of the cats of Siam were largely self (solid) coloured. When the cats from Siam were bred, the pointed cats were eventually registered as Siamese the others were referred to as "non-blue eyed siamese" or foreign shorthair. Other breeds that were developed from the moggies of Siam include the Havana Brown and the Korat.

It was not until 1977 that the Oriental Shorthair was accepted for competition into the CFA. In 1985, the CFA recognised the bicolour oriental shorthair. The bicolour is any one of the accepted oriental shorthair colour patterns with the addition of white to the belly, face, and legs/paws.