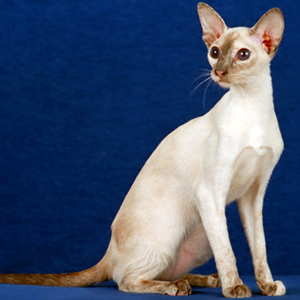 The effort to produce a Siamese-style pointed cat in colours other than the traditional four began in England and in America in the 1940s, carried out by breeders who used foundation crossings between the Siamese, Abyssinian, and the red domestic shorthair. The American Shorthair also became part of the matrix. Initially, the Colourpoint breeders experienced setbacks and failures; in the effort to achieve the proper colours in the proper places, the Siamese body type was often sacrificed. The breeding was further complicated by the difficulty of working with the red coloration because it is a sex-linked colour.

The Colourpoint Shorthair is a highly intelligent, playful, and people-friendly breed. They are extremely affectionate and outgoing and enjoy lounging around and playing with people, causing them to also be described as "extroverts". They can also be very sensitive with nervous temperaments, which do not adapt well to changes of environment or to strangers. Like Siamese, they can be extremely vocal and attention-demanding, feeling a need for human companionship. They have over 100 vocal sounds, much more than regular cats.