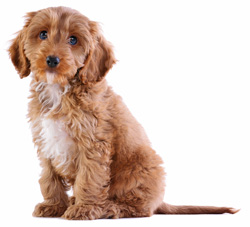 
A Cockapoo or Cockerpoo is a cross-bred dog, created by crossing a Cocker Spaniel and a Poodle, in most cases the Miniature Poodle. Breeders usually try to retain the small build of the spaniel, while retaining the wavy quality of the Poodle's coat.

The Cockapoo has been popular in the United States since at least the 1970s. It has become so common that many, if not most, Cockapoos on the market today are the result of breeding male and female Cockapoos rather than of a direct cross between the Cocker Spaniel and the Poodle.

The Cockapoo is still under development. Strictly speaking, the Cockapoo cannot yet be described as a dog breed because it does not 'breed true'. In breeders' terms, 'breeding true' means that, when two specimens of the same breed are mated, the puppies have consistently predictable characteristics and will resemble their parents, rather than exhibiting random characteristics of the dog breeds in their parents' ancestries. Further, the breed standards of breeds-under-development are invariably freer, more open to interpretation and cover more observable types than those of established or kennel club recognised breeds.

Cockapoos generally weigh between 20 and 24 pounds (9 to 11 kg) and stand about 14 or 15 inches (35 to 38 cm) at the withers. Like their originating breeds, Cockapoos come in a variety of coat colours, both solid colours and combinations. The general shape of the Cockapoo, in particular its ears, mostly resembles the Spaniel, but the coat and face are usually more reminiscent of the Poodle, some Cockapoos shed and some don't. They are loyal, and don't cost more than a cat to feed. They are pretty much odourless and they don't slobber.

Cockapoos are well known for their loyalty to their owner, and are known to get jealous if he/she pays attention to anything else. Like most spaniels, they can be very energetic, but this can vary widely from dog-to-dog. Like both their parent breeds they are trainable and intelligent.

Cockapoos are generally well off in the health-risks lists, so vet bills are usually not an issue. However, they can suffer from problems associated with either the Cocker Spaniel or the Poodle.