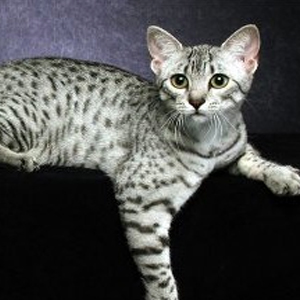 
The California Spangled Cat is a breed of cat that was bred to resemble spotted wildcats, like the ocelot and leopard. They were originally bred in the 1980s and were only ever a rare breed, and were usually expensive. The popularity of two other spotted cats breeds- the Ocicat and the Bengal- overshadowed their development.

Inspired by the poaching death of a leopard, the anthropologist Louis Leakey motivated Californian Paul Arnold Casey, Jr. to breed a domestic cat resembling a small leopard, and that this would emphasize how important it is to preserve the leopard. Casey died April 23, 2007 in Los Angeles, California. He was 60 years old.

California Spangled Cats are a crossbreed of many strains of cat, including the Abyssinian, American Shorthair and British Shorthair. Despite their wild appearance, they are completely domestic.

California Spangled Cats are affectionate, social, curious, and extremely devoted to their owners. They are big on eye contact and being in on the action, they love to perch on places that are at your shoulder or eye level so that they can see exactly what is going on. These kitties are known for their well-honed intelligence, athletic abilities, high energy level, and accidental acrobatics. California Spangled Cats love to pounce and have very sharp hunting skills, they also enjoy games that involve a large participation part by their owner.