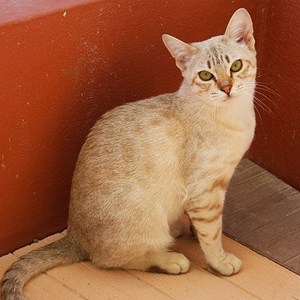 
The Australian Mist (formerly known as the Spotted Mist) is a breed of cat developed in Australia.

This breed was developed by Dr Truda Straede in Australia commencing in 1976, hence its name. The breed was developed by crossing the Burmese, Abyssinian, and Domestic shorthair cats to create a shorthaired cat with a spotted coat. The name was changed from 'Spotted Mist' to 'Australian Mist' in 1998 when cats with marbled coats, rather than spots, were accepted as part of the breed.

They make perfect pets for children of all ages, even very young ones, as they are tolerant of handling, and are not inclined to scratch. As kittens they are lively, but sober up a little on maturity. Their life expectancy is in the mid to late teens.

Australian Mists thrive on human contact, making them happy to remain indoors between dusk and dawn or to be wholly indoor pets, an advantage as most people now prefer to keep their pets indoors. This also protects native wildlife. Some Mists can be trained to go for walks on a lead. Their tendency to crawl into the nearest lap with or without invitation and to constantly hang around to see what people are up to, makes them excellent companions for home workers and invalids. Desexed cats and kittens fit in easily with all sorts of cats and dogs. Selective breeding has further enhanced these qualities, creating a truly companionable pet, which quickly becomes a member of the family.

The breed is now accepted for Championship status by the World Cat Federation. The Australian Mist celebrated 20 years as a Championship breed in Australia during 2006.