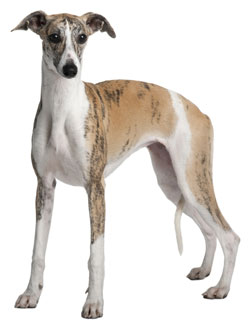 
The whippet is a a member of the sight hound family. They are active and playful and are physically similar to a small greyhound.

These dogs were bred to hunt by sight, coursing game in open areas at high speeds. Although one can find numerous representations of small Greyhound-like hounds in art dating back to Roman times, the modern whippet was created by working-class people of northern England by crossing Greyhounds with several other breeds, including the Italian Greyhound and a now-extinct long-legged terrier. These small coursing hounds were cheaper to feed and house than Greyhounds but were very handy at providing rabbits for the pot. They also were used to provide sport on nonworking days as their owners enjoyed racing them against each other. The modern look of the breed was created by upper-class English dog fanciers, who bought the best-looking Whippets and bred them selectively to appear most similar to a miniature Greyhound.

Because colour is considered immaterial in judging Whippets, they come in a wide variety of colours and marking patterns - everything from solid black to solid white, with red, fawn, brindle, blue, cream. All manner of spots and blazes and patches are seen, sometimes all in the same litter.

Whippets are generally very quiet and gentle dogs, content to spend much of the day sleeping. They are not generally aggressive with other animals, and although especially attached to their owners, they are friendly to visitors. They are not prone to snapping, so they are good with young children. They may or may not bark when strangers arrive, and are not suited to be guard dogs due to their trusting and unsuspicious nature. Outside, however, particularly when they are racing or lure coursing, they demonstrate their superb athletic skills and will pursue their quarry (even when it is an artificial lure) with the heart of a lion.

Unlike many other breeds, the males are as easy to housebreak, and no more aggressive than bitches. Both sexes make excellent pets. Males tend to be slightly more loyal and enjoy repetitive play. Females can be a little more complex and strong-willed, but are equally devoted to their owners. Males tend to run one to two inches taller, and three to six pounds heavier, than females.

Whippets are not well adapted for living in a kennel or as outside dogs. Their coats do not provide the insulation to withstand prolonged periods of exposure to the cold. Their natural attachment to people makes them happiest when kept as house pets. The quiet Whippet is well suited to apartment life, although they do need regular exercise.

Whippets, as their heritage would suggest, are outstanding running dogs and are top competitors in lure coursing, straight racing, and oval track racing. In these events, a temporary track and lure system is set up. The lure is usually a white plastic trash bag. With new methods of motivational obedience training being used, Whippets are becoming successful obedience dogs. Many enjoy fly ball and agility. The elegance and ease of grooming of the Whippet have made it a popular show dog, but to be successful at this sport, you must purchase a puppy who is considered by its breeder to be show quality.

Given proper nutrition, exercise, and veterinary care, most Whippets live for 12 to 15 years. They are generally healthy, and are not prone to the frequent ear infections, skin allergies, or digestive problems that afflict other breeds. Genetic eye defects have been found in the breed, but are still very rare. Because of this threat, the American Whippet Club recommends that all breeders have the eyes checked clear on their breeding stock. Hip dysplasia is not a problem in Whippets.

There are dogs who have been referred to as long-haired Whippets, but it is the opinion of the American Kennel Club and the American Whippet Club that these dogs are actually mixed-breeds. They are not recognized by AKC or any other major canine registry, and cannot compete in events such a racing or coursing.