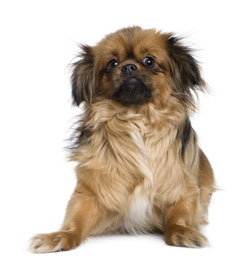 
Tibetan Spaniels are a breed of small, highly intelligent dogs originating in the Himalayan mountains of Tibet. This breed is not a true Spaniel; its breeding and role differs quite a bit (Spaniels are gun dogs.) Tibbies, as they are often called, make excellent house pets for all people, including families with small children.

The Tibetan Spaniel has an aloofness with strangers and general independence that has been referred to as "cat-like". Tibbies are extremely loyal and affectionate to their owners, and are generally content to spend the day sitting patiently at their feet or next to them on the couch. These dogs generally get along well with animals, including cats and other dogs, though there is the possibility for some infighting, particularly between bitches.

The Tibetan Spaniel is an old breed, known for over 2,000 years. Tibetan Spaniels may be an ancestor of the Pekingese. This dog was bred by monks to live in Tibetan monasteries where they served as companions and watch dogs. Tibbies have excellent eyesight and would patrol at the top of the monastery walls and spot incomers, alerting both the monks and the Tibetan Mastiffs that roamed the courtyard.