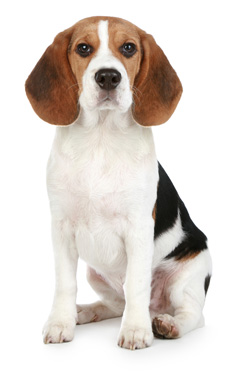 
A Beagle is a medium-sized dog breed and a member of the hound group, similar in appearance to a Foxhound but smaller with shorter legs, and with longer, softer ears. Beagles are scent hounds used primarily for hunting rabbits to larger hares.

The Beagle has a somewhat oval skull; a medium-length, square-cut muzzle; large, hound-like hazel or brown eyes; long, low-set ears (big), turning towards the cheeks slightly and rounded at the tips; a medium-length, strong neck without folds in the skin; a broad chest narrowing to a tapered abdomen and waist; a short, slightly curved tail; an overall muscular body; and a medium-length, smooth, hard coat. One standard calls for ideally shaped beagles to be twice as long as tall, and twice as tall as wide.

They appear in a range of colours, not limited to the familiar tri-colour (white with large black and light brown spots). Two-colour varieties are always white with coloured areas, including such colours as "lemon", a very light tan; "red", a reddish, almost orangish brown; "liver", a darker brown, is the only colour not allowed. "Ticked" varieties may be either white or black with different colored spots ("ticking"), such as the bluetick beagle, which has spots that appear to be a midnight-blue colour, similar to the bluetick coonhound. Some tricolour beagles also have ticking of various colours in their white areas. The brown is usually the last colour to appear on beagles, usually taking 1-2 years to fully develop. Beagles have a white-tipped tail, or "flag", which is important in locating them in the field due to their short height.

In Medieval times, there was a breed called a "pocket beagle", which stood at 8-9 inches. This breed no longer exists, and many claims by some breeders to have pocket beagles for sale usually indicate poor breeding practices.

The Beagle has a very good temper and gentle disposition. Beagles are intelligent, but are stubborn and may be hard to train (due to their strong will). They are an especially loyal breed and are very friendly. They rarely show signs of aggression, and are excellent with children. Beagles also get along with other dogs, provided that they have been socialized correctly.

They are playful and energetic dogs who enjoy long walks. Being scent hounds, if released, they may follow a scent endlessly or will incessantly try to tag along with other dogs regardless of cars, strangers, etc. Because of this, many humane societies and pounds often pick up stray beagles. They must never be let off leash unless in a confined area such as a fenced back yard.

Beagles are pack animals, and can be prone to separation anxiety. Beagles are best in pairs if they are going to be alone for long periods of time. Beagles are a healthy breed, often living for 12 to 15 years, but they do have a few common health problems.

The Beagle's ears are long and floppy, which can trap warm moist air or prevent air from reaching the ear canals. This condition can be successfully treated with regular cleaning daily and sometimes medication for major cases. Careless bathing can get water into their ears, potentially causing ear infections.

Sometimes their eyelashes grow into the eye and irritate the eye, also known as distichiasis; this might require surgery to remove the eyelashes.

Obesity is a common health problem in Beagles due to people overfeeding them in response to their playful and kind behaviour. A healthy Beagle should have some definition to its waist and have an hourglass appearance when viewed from above. You should be able to feel their ribs. Excessive weight can lead to problems such as hip dysplasia and heart trouble. They need exercise and a good diet.