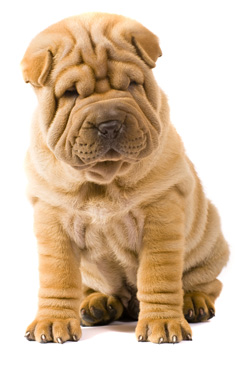 
The Shar Pei is dog of average height 18" - 20" at the withers and average weight 40 - 45 lbs. Shar Pei is a breed of dog whose distinctive feature is deep wrinkles. The name itself translates to "Sand Skin," not because of their colors, but because of their texture. As young puppies, they have lots of wrinkles, but as they mature, the wrinkles disappear as they "grow into their skin". The adult Shar Pei should have facial wrinkle, a little over the shoulders, the rest of the dog should be free of wrinkling.

There are 3 coat types in the Shar Pei, the very short sharp Horsecoat, the Brushcoat which is up to 1" long & the Bearcoat which is a long silky coat that can occur occasionally, this coat is a major fault & although they make wonderful pets they cannot be shown.

The Shar Pei breed comes from the Guangzhou and Canton provinces of China where it was used as a farm dog for ratting & guarding the home. (The original Chinese Shar Pei was a normally lighter boned horsecoat.)

At one point they were close to extinction, and were listed in the Guinness Book of World Records as "The rarest dog in the world". Since then, however, the Shar Pei has begun to thrive in many parts of the world as an excellent family dog, due to their loving and devoted nature.

A common problem caused by irresponsible inbreeding is excessive wrinkling that causes an eye condition which turns the eyelashes inward, thus irritating the eye and possibly causing infection.