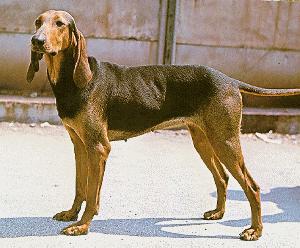 
The Segugio Italiano is an Italian breed of dog of the scenthound family. It comes in both short-haired and wire-haired varieties. It is thought to be an ancient breed, descended in pre-Roman eras from progenitor scenthounds in ancient Egypt.

The Segugio is a square dog, whose length should be equal to its height at the withers. It is fawn-coloured or black and tan. The dogs are 45–52 cm tall at the withers and roughly 20–23 kg in weight. Its determination to track a scent is similar to that of a Bloodhound, but unlike the Bloodhound the Segugio is also interested in the capture and kill of its victim. In 2009 ENCI (the Italian Kennel Club) registered 4,500 specimens of the short-haired variety and 1,740 wire-haired specimens, making this one of the top ten breeds in Italy. Its popularity in Italy is due to its outstanding performance as a hunter of game. Although Italians also use other hound breeds, such as Ariegeois, Petit Gascon Santongeois, Porcelaine, Posavatz and Istrian Hounds, the Segugio Italiano has remained the choice of most Italian hunters due to its exceptional abilities. Hunters who hunt hare alone or in small groups find this dog to be ideal. The Segugio Italiano can also hunt larger game, such as wild boar (although it not considered a specialist for this quarry), wild sheep or goats or ungulates of the deer family. The Segugio Italiano works alone or in packs, depending on the quarry.

This dog is first and foremost a working dog, and it is rarely kept as only a pet.