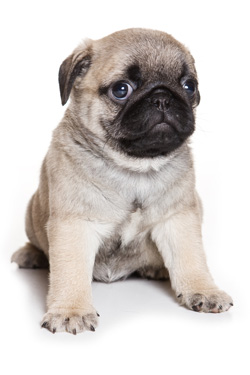 
The Pug is a small but robust dog about 25 - 28 cm tall and with an average weight of 15 to 25 lb (7 to 11 kg). They are said to have been bred to be royal companions. The Pug is a very sociable dog. They are extremely smart and quite stubborn. Their appearance is characterised by a flat, wrinkled face, compact body, and curled tail. Pugs have three colour variations: fawn with a black mask and ears, entirely black, or (much less commonly) silver. The pug is popular as a house pet, as it requires little exercise and is easy to groom. They are also compatible with most children and other animals.

Because they have extremely short snouts, some pugs easily scratch their corneas, and can develop breathing problems. They are also prone to skin infections if the crevices in their face are not kept clean.

The Pug is a very sociable dog, but quite stubborn. The breed even has its own motto associated with it: "multum in parvo" (a lot [of dog] in a little package). The Pug is a popular breed for a housepet, as it is easy to groom (though it sheds substantially more than other dogs of similar size). However, a pug likes to consider himself the boss. Therefore tiny children who do not understand how to correctly treat the pug can cause the pug to be scared, defensive, or shy. Pugs are true "lap dogs", in that they most often want nothing more than to curl up in their owner's lap (and perhaps a snack).

They require regular exercise, and some Pugs will walk for an hour or more. When exercising a Pug, however, it is important to make sure they do not overheat, as their short noses do not cool them off as easily as those of longer-nosed breeds. Pugs are generally compatible with most children and other animals.

Some Pugs, like many dogs, suffer from separation anxiety; that is, when they are left alone, they bark and whine. Pugs are capable of being trained to stop their crying.

Pugs are not noted for high achievement in obedience competitions, although, like all dog breeds, they are intelligent and learn quickly in the right environment. According to the book The Intelligence of Dogs, they have only fair ability to learn new commands and to obey commands the first time. On the other hand, it is worth noting that there is much debate about how to accurately measure dog intelligence.

A pug named Fortune was used by Napoleon Bonaparte's wife Josephine to send him secret messages. A pug also appeared in the popular movie Men in Black. Celebrities such as Maura Tierney and Carol Kane have appeared in TV and print ads with their pugs. A pug was also one of the stars of the movie Milo and Otis.