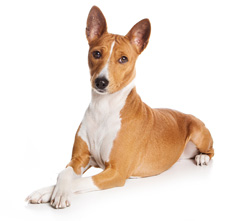 
Basenjis are small, elegant-looking, short-haired dogs with erect ears, tightly curled tail, and graceful neck. Some people equate their appearance to that of a miniature deer. Their forehead is wrinkled, especially when young. Eyes are typically almond shaped, which gives the appearance of squinting with a serious look. It is not uncommon for a Basenji to stare down a person, which gives some people an unsettling feeling. The stare is not meant as an aggressive act; Basenjis feel that they are of equal stature with humans and are not intimidated by a human's interest in them.

Basenjis typically weigh around 20 to 24 pounds (9 to 11 kg) and stand about 17 inches (43 cm) tall at the withers. They are an athletic dog, and are deceptively powerful for their size. They have a graceful, confident gait like a trotting horse, and skim the ground in a "double-suspension gallop" when running flat out at their considerable top speed.

Most Basenjis have a strong dislike for contact with water, and will go to great, and sometimes amusing, lengths to avoid getting wet. On the other hand, they are extremely curious dogs, and can temporarily be completely oblivious to the pouring rain if something piques their interest. They are highly intelligent and learn quickly, but they also have a cat-like independence and "self-motivation" which can make them somewhat casual about obedience.

A healthy Basenji is a mischievous and good-humoured animal, and is not above testing the limits of its environment and owner just for sport. They can be aloof with strangers but form strong bonds with their owners. If not supervised or trained properly, Basenjis can become bored and destructive when left alone.

Extremely quick and fast on its feet, the Basenji loves to run and chase, so much so that they are sometimes competitively raced in lure courses.

There are few creatures the Basenji is likely to encounter (including its owner!) that it does not believe it can either outwit or outrun. This, combined with a virtually fearless approach to the world, make it a good idea not to allow a Basenji to run free in an unconfined area or where it may get into trouble. Basenjis can be very good with children if raised around them, but may not have much patience for them otherwise.

The Basenji is one of the most ancient breeds of dog. Originating on the continent of Africa, it has been venerated by humans for thousands of years. Basenjis can be seen on stele in the tombs of Egyptian pharoahs, sitting at the feet of their masters, looking just as they do today, with prick ears and tightly curled tail.

The Basenji had all but disappeared from civilization when it was rediscovered in the Congo region of Africa in 1895. There, the Basenji was highly prized by natives for its intelligence, courage, speed, and silence. They were invaluable assistants to the hunt, chasing wild game into nets for their masters. The Azande and Mangbetu tribes from the north-eastern Congo region describe Basenjis, in the trade language of Lingala, as "embwa na bwasenji". Translated, this means "dogs from when we were wild" or "dogs from long ago".

Several attempts were made to bring the breed in England, but the earliest imports succumbed to disease. It was not until the 1930s that foundation stock was successfully established in England, and thence to the United States. So it is that nearly all the Basenjis in the western world are descended from these original imports.