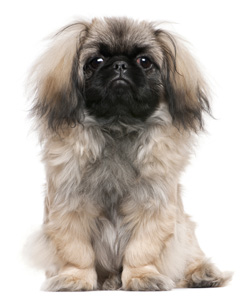 
Pekingese is an ancient toy breed of dog, originating in China. They were the favoured imperial pet. Good-natured and happy, these dogs are a pleasure to keep. They enjoy family environments, but require regular cleaning if in outdoor environments. Their eyes are very delicate as they sit above the socket rather than within the socket.

These dogs are also called Dogs of Foo (or Fu) by the Chinese, and how much they are revered can be seen in the number of Chinese artworks depicting them. They were considered a guardian spirit as they resembled dragons and lions (see Lion dance and Dragon dance).

These dogs can be stubborn and jealous. This is not a dog for someone who wants a dog that always comes when it is called. It is easy to believe that Pekes know that they are royalty and expect you to know it, too. This might make them unsuitable for the first-time dog owner. The Pekingese personality has been compared to a cat, although this isn't quite right. Where a cat can be trained, a Pekingese needs to be convinced that the training is beneficial to him as well as to you. But, if they love you, they will do anything for you, even fight to the death to protect you.

The Pekingese is generally a one-person dog. They decide who they like best, and it might surprise you. They more than tolerate the others in their person's life, but that person might have to withhold some attention from the Peke if there is a danger that the Peke sees a child as a rival. Most healthy and well-trained Pekes are fine with children. Unfortunately, because they are among the 'cute and I know it' breeds, many folks don't properly train their dogs and end up with difficult jealousy problems.

The Pekingese breed is over 2000 years old and has hardly changed in all that time. One exception is that modern breeders and dog-show judges seem to prefer the long-haired type over the more-traditional spaniel-type coat.

All breed standards allow all sorts of colour combinations. The most common is red sable; this is the colour of the majority of Westminster Pekes. Black and tan is popular as well, but the dog show people seem to prefer blondes over the black and tans. The solid white (except face) or solid black Pekingese is quite striking. The face is usually black with deep brown eyes. There was, supposedly, in a British Pekingese line, a blue (grey) Pekingese. Albino dogs are not within the standard.

The Pekingese gait is like no other in the dog world. Because the Chinese originally bred them to be companions to the Emperor and his ladies and eunuchs, they are bowlegged to discourage wandering. However, they can and will keep up with the big dogs when allowed. The bow-leggedness makes their walk, run, or trot quite striking. They usually pull their tail up in an 'I don't need you' attitude as they strut. There is no sight like a pack of Pekes running about. It has the essence of butterflies and lions.

The breed originated in China in antiquity, most likely from Asian wolves. Recent DNA analysis confirms that this is one of the oldest breeds of dog. For centuries, they could be owned only by members of the Chinese Imperial Palace. The first Pekes arrived in the west in 1860 as a gift of four dogs.

There are two origination stories for the Pekingese. The first is the most common, The Lion and the Marmoset: A lion and a marmoset fell in love. But the lion was too large. The lion went to the Buddha and told him of his woes. The Buddha allowed the lion to shrink down to the size of the marmoset. And the Pekingese was the result.

The second, less-common, originating story is The Butterfly Lions: A lion fell in love with a butterfly. But the butterfly and lion knew the difference in size was too much to overcome. Together they went to see the Buddha, who allowed their size to meet in the middle. From this, the Pekingese came.

Another legend says that the Peke resulted from the mating of a lion and a monkey!