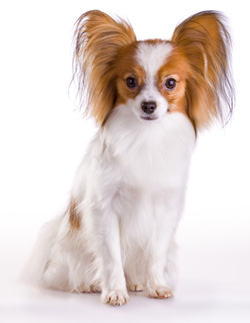 
The Papillon is a small dog with large, luxurious ears that earned it its name, the French word for butterfly.

The Papillon is believed to be one of the oldest of the toy breeds. It probably originated in continental Europe and was a favourite at the French court. The most famous owner was Henry III; documentation of his devotion to the breed lies in his declaration of the Papillon as the official dog of the Royal Court during his tenure. Other famous owners are said to have been Marie Antoinette, and Madame de Pompadour.

There is evidence that these small dogs were favourites of European aristocrats, particularly French royalty, during the time of the Old Masters, as Continental Toy Spaniels (Phalčnes and Papillons) were included in many Old Master royal portraits from as early as the sixteenth century.

There are many stories about the Papillon. Marie Antoinette was said to have walked to the guillotine clutching her small dog under her arm. Tradition has it that her dog was a small spaniel that had been brought to the French court from Spain on the back of pack mules. According to the story her pup was spared and cared for in a building in Paris still called the Papillon House. Marie's small spaniel was said to have descended from a very old drop-eared breed known as the Epagneul Nain Continental, or Continental Dwarf/Toy Spaniel that appeared in church frescos and paintings as far back as the 13th century.

This breed is still officially referred to as the Epagneul Nain Continental (ENC) in non-English-speaking countries. Some say that the name Squirrel Spaniel has also been used, most likely referring to an earlier standard in which the tail set is referred to as "curling over the back as a squirrel's." One version of the history of the two varieties of ear shape in the ENC ("Papillon" to denote the erect ear and "Phalčne" to denote the dropped ear) is that toward the end of the 19th century, breed fanciers bred a version of the spaniel whose ears stood up. This dog was said to have been nick-named papillon based on the impressively large erect ears that resembled the wings of a butterfly. The drop eared variety of the breed came to be called the Phalčne (which means "moth"). Both types are still bred today and can show up in the same litter. The Papillon variety is much more common although there has been a recent resurgence in the popularity of the Phalčne.

The "ideal" modern Papillon is required to have a "beautiful" [long and flowing] coat, which is considered proper only if it is a single coat (i.e., has no fluffy or cottony undercoat), short on the head but profuse around the neck, chest, and pantaloons. The tail should be a plume of long hair. A proper single coat insures relatively low maintenance in grooming. The large erect ears and fringe on the ears is the most notable physical attribute of the erect-eared breed today. The Phalčne of today is the same as the erect-eared Papillon excluding its dropped spaniel ears.

Even though the breed has the connotation of a dainty toy breed, many owners will tell you they act like big dogs in small dogs' bodies. There are several possible reasons for this. First, the Papillion is hardy; some people believe the Papillon is very capable of handling a good five-mile walk. Some owners believe the reality is that they will resist such an outing if the grass is dampish or if there are two clouds in the sky that might lead to rain, but others have experienced them as very versatile in almost all conditions, although not necessarily with prolonged exposure. Perhaps they seem to be larger dogs because to many people Papillons appear not to be prone to small dog quaking when confronted with a new situation. In fact, some Papillon owners believe that their dogs interpret that any new event has been put on for their benefit, and believe that the dogs do their best to be an attentive host or hostess. Another aspect of the Papillon that has led many to believe the 'big dog' assertion is that this breed has surprised many people with its athleticism.