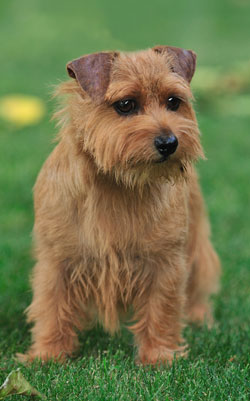 
The Norwich Terrier is a breed of dog bred to hunt small mammals considered to be vermin. These terriers are among the smallest terriers (11-12 lbs, 5 to 5.4 kg; 9 to 10 inches (24 to 25.5 cm) at the withers), with prick ears and a rough coat. In its earliest history, it was also known as the Jones Terrier and the Cantab Terrier. It was developed in East Anglia in England.

The breed has existed since at least the late 1800s, when it was the mascot of students at Cambridge University. Small red terriers, descendants of Irish Terriers, had existed in the area since at least the 1860s, and these might be the ancestors of the Norwich, or it might have come from the Trumpington Terrier, a breed that no longer exists.

Since its earliest identification as a breed, puppies have had either drop or prick ears, and both were allowed when the Norwich was first recognised in the show ring in 1935. Drop ears were often cropped until it became illegal to do so. This intensified a long-standing controversy over whether drop-eared dogs should be allowed in the show ring and whether the primary difference was simply the ears or whether other, deeper, personality and structural differences marked the drop-eared variety. Starting in the 1930s, breeders increased their efforts to distinguish the breeds.

Both ear types continued to be allowed in the ring until The Kennel Club in England recognised the drop-eared variety as a separate breed, the Norfolk Terrier, in 1964 or 1965, and the American Kennel Club did the same in 1979.