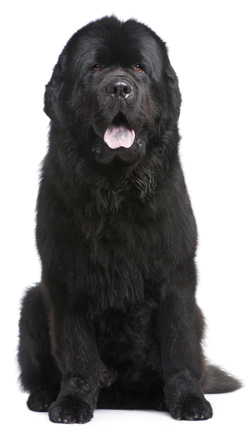 
The Newfoundland is a large, usually black, breed of dog originally used as a working dog in Canada.

Newfoundland's ("Newfies") have webbed feet and a water-resistant coat. Males weigh 60-70 kg (130-150 pounds), females 45-55 kg (100-120 pounds), putting them in the "giant" weight range. The origin of the breed is uncertain, but they were in use as working dogs on the island of Newfoundland as early as 1000 A.D. Newfoundland's have been used as water rescue dogs, and for draft work. The breed almost became extinct and most modern-day Newfoundland's trace their ancestry to a single stud dog named Siki who lived in the 1920s.

Most Newfies are black, but brown, and grey varieties exist, as well as the striking black-and-white "Landseer" (named after the artist Sir Edwin Landseer, who featured them in many of his paintings).

Newfies have a gentle, placid disposition. Indeed, the official AKC breed description says "Sweetness of temperament is the hallmark of the Newfoundland; this is the most important single characteristic of the breed." They are protective of children, and the dog Nana in James M. Barrie's Peter Pan was a Newfoundland. (Newfie owners resent the depiction of her as a St. Bernard in the Disney animated film version).

Unofficially, the second most important breed characteristic is a tendency to drool. Newfie owners acknowledge this cheerfully, proudly displaying paraphernalia with slogans such as "Newfoundland is my name—slobber is my game" and "Spit happens." One club assures us that "that's OK, because drool is good for you."