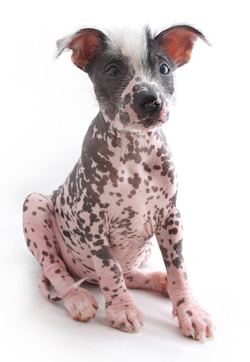 The breed ranges in size from about 10 pounds (4 kg) to 50 pounds (20 kg), with an average body temperature of 40 °C. Similar in appearance to a Pharaoh Hound, with a sleek body, almond-shaped eyes, large bat-like ears, and a long antelope neck, the Xolo is notable for its dominant trait of hairlessness. Many members of this breed are also missing several teeth. There is also a "coated" Xolo with a very short coat of hair, and individual dogs may exhibit varying degrees of head and body coats.

The breed is native to Pre-Columbian Mesoamerica, and may date back 3500 years or earlier. Some cultures are believed to have kept them as pets, and believed the animals to be sacred.

Xolos were considered sacred dogs by the Aztecs because they believed the dogs were needed by their masters’ souls to help them safely through the underworld. According to Aztec mythology, the god Xolotl made the Xoloitzcuintle from a sliver of the Bone of Life from which all man was made. Xolotl gave this gift to Man with the instruction to guard it with his life and in exchange it would guide Man through the dangers of Mictlan, the world of Death, towards the Evening Star in the Heavens.

Even today some people may believe this breed to have healing, telepathic, or (gray) alien qualities. Other cultures ate the meat of the Xoloitzcuintli for ritual or medicinal purposes, and the meat may still be found for sale in some parts of rural Mexico.

Xolos are not currently recognized by the American Kennel Club (AKC), making them a rare breed in the United States and other parts of the world. The breed is recognized by the FCI (Federacion Canofila Mexicana) which began a registration and breeding program for the Xolo on May 1, 1956. Prior to that time the Xolos were considered nearly extinct. New breed stock is still found in remote pockets of rural Mexico.