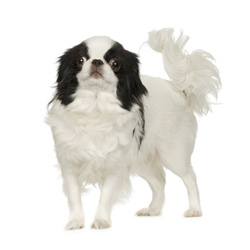 
In Japan, there are Inu (dogs) and there are Chin . The Japanese Chin (also known as the Japanese Spaniel) is the dog of Japanese Royalty. A lap dog and companion dog, this small breed of toy dog is one with a distinctive heritage.

These dogs are around 20 to 27cm (8 to 11 inches) in height at the withers. They have straight silky long hair that is most often black and white or red and white, or less often black and white with tan points. They have feathered tails that curl up over their back. Their faces have an "oriental" appearance, with a short, upturned muzzle and large wide-set eyes that have white visible in the inner corners, creating an astonished expression.

These dogs commonly have a white spot or blaze in the middle of their foreheads known as Buddha's Thumbprint. This can be attributed to the Buddhist Emperor Ming of Han China, who owned many of these dogs.

This breed is considered one of the most cat-like of the dog breeds in attitude. A companion dog, It will be very loving and loyal to its owner, but is distrustful of new people. Chins prefer familiar surroundings, and are very uncomfortable in unfamiliar areas and with new situations. They are a quiet breed, not possessing the yappy bark commonly associated with many of the toy breeds, making them excellent apartment dogs.

There is some debate as to the origins of this breed. Some say that the ancestors of these dogs first began to appear in Japan around the year 732, as gifts from the rulers of Korea. Others attribute the ancestors of the Chin to breeds of Chinese origin.

An American naval officer, Commodore Perry, helped make this dog famous in England in 1853 when he presented a breeding pair to Queen Victoria after returning from Japan. He is also credited with this dog's appearance in America when he later gave a pair of these dogs to the President of the United States.