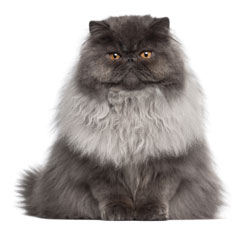 
The Persian is considered to many to be the aristocrat of the cat fancy. It was revered from the first moment it was seen and has held top billing ever since.

Description: Contemporary, “ideal” show Persians bear resemblance to their ancestors. The earlier Persians had longer faces, larger ears, smaller, more closely-set eyes and a rangier bodies. The type of the early Persians was changed radically with the introduction of longhaired cats from Persia (Iran) into the “Angora-Persian” gene pool. The Iranian Persian brought sturdy bodies, short lets, broader, rounder heads and longer, thick fur. When the Angora and the Iranian cats were crossed, thee foreign type began to disappear and the cobby type replaced the rangier early type. Subsequent cats were bred to capitalize on the sturdy, compact Iranian Persian type. The breed was soon known simply as Persian.

The cat should be firm in flesh, not fat, and well-balanced physically and temperamentally, giving the impression of robust power. The cobby body is well-rounded; the boning is sturdy, large and in proportion to the body. The muscles are firm and well-developed. The back should be short and level. The tail should be short, yet in proportion to the body; the plumed tail of the Persian should be short, carried without a curve at an angle lower than the back, but not with a bulldog look; viewed from behind, the legs should be straight. The chest is to be deep, equally massive across the shoulders and rump with a short, well-rounded midsection. The feet are large and round with short toes, toe tufts are desirable. The coat of the Persian should be full of life. The downhairs are dense, making the coat stand off the body. The hair should be long all over the body, including the shoulders. The ruff should be immense and continue to a deep frill of hair around the neck between the front legs. In Persian type, the head should be broad, round shape, massive, with great breadth of skull and a domed forehead. In profile, a straight line is seen from the forehead, nose and chin. The underlying bone structure is round, the cheeks full and prominent. There should be a sweet expression to the face. This is very important, as the cats should be pleasant to look at, never mean or frowning in appearance. Jaws are broad and powerful with perfect tooth occlusion. The short nose should be as broad as it is long, with a definite break between the eyes. Some prefer a deep nose break and upturned nose. Others prefer a break with the nose taking a slightly downward turn. As long as the standard does not specify which is correct, either is acceptable. Yet is must be remembered that the nose must fit in the straight line of the dome and chin, therefore the shorter, turned-up nose would best meet this requirement. The chin is full, strong and well-developed, fitting into the round face. The neck should be provide adequate support for the massive head and should be short, thick, well-muscled and powerful. The small ears are set wide apart and low on the head always fitting onto the rounded contour. The ear furnishing should be long and curved. The eyes are large, round, full, expressive and set wide apart. The eye colour should conform to the coat colour, the deeper the better. Persians have a very thick, woolly undercoat, causing the hair to be thick and plush. This, however goes in hand with matting. They have to be combed and brushed constantly to keep their hair from matting, and they have to be bathed often. Do not plan to own a Persian unless you have adequate time to give to grooming.

History: The exact origin of the Persian is unknown. By some accounts they originated in Asia Minor and were first seen in Europe in the early 1700s, although there were reports of long haired cats in Italy (imported from Asia) in the late 1500s. Early British books referred to these cats a French casts or Angoras. They were reported to have come from Ankara, Turkey, also the supposed birthplace of the Turkish Angora, to whom they bore a close resemblance.