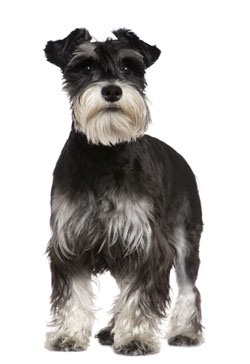 
The Miniature Schnauzer is a breed of small dog of the Schnauzer type that originated in Germany in the mid-to-late 19th century. The dogs are believed to have developed from crosses between the Standard Schnauzer and one or more smaller breeds such as the Poodle, Miniature Pinscher, or Affenpinscher. The earliest recorded Miniature Schnauzer was in 1888, and the first exhibition was in 1899. The AKC accepted registration of the new breed in 1926, 2 years after they were introduced to the United States.

Miniature Schnauzers are quite distinctive in appearance. They are compact, muscular, and square shaped. Owners typically groom them with long bushy eyebrows, beards, and long leg hair. Ears are sometimes cropped to stand upright, and the tail may also be docked. Their coats are wiry, and shed very little, which adds to their appeal as house pets. The dogs are known for their friendly personality and mischievous sense of humour as well as intelligence and boundless energy. There are three recognized colours: black, salt and pepper, and black with silver markings. Occasionally, they may be white, but this is rare. Heights of about 13 to 15 inches (330 to 380 mm) are common, and they generally weigh 13 to 18 pounds (6 to 8 kg).

Miniature Schnauzers are often classified as "working dogs," owing to their past as ratters. Currently, they are most often employed as companion animals.